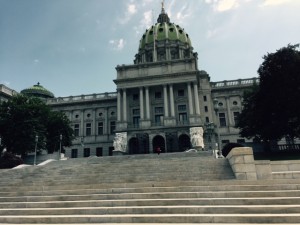 We are here today to speak truth in the public square.

To speak truths which, though they may be uncomfortable to hear and unwelcome to some, are not rendered false by their scarcity nor unspeakable by the painful realities which they disclose.

We are here to speak for those whose voices have been silenced by death or by economic and military oppression.

We are here to question those who believe that security can be attained by coercion and homicidal practices, and to assert that God has made a world in which humanity can solve it’s problems by the difficult works of conversation, compassion and generosity.

Under this roof we are a diverse group, but the diversity is less impressive than the oneness. We all belong to the same family–the human family.

I am John Stoner from Akron, Pennsylvania. I have lived in this state since my birth in 1942, paying my taxes and speaking my truth since becoming an adult in 1960.

Many of you have come from the Mennonite World Conference Assembly at the Farm Show Complex to speak words of lamentation and warning about the conduct and consequences of drone warfare. Others have come to hear what will be said about military drones. To each and all of you, I say “Welcome”.

Hear these words from the writer of Ecclesiastes, chapter 4.
Ecclesiastes 4:1-4

Again I saw all the oppressions that are practiced under the sun. Look, the tears of the oppressed—with no one to comfort them! On the side of their oppressors there was power—with no one to comfort them. And I thought the dead, who have already died, more fortunate than the living, who are still alive; but better than both is the one who has not yet been, and has not seen the evil deeds that are done under the sun.Then I saw that all toil and all skill in work come from one person’s envy of another. This also is vanity and a chasing after wind.

And from Jesus, these words:

Seek first the empire of God and its justice, and all these things will be yours as well.

But today, we say that terror cannot be defeated by terror. Today, we join our voices as Mennonites and Brethren in Christ from around the world to lament this false morality of weaponized drones, this chasing after the wind (Ecclesiastes 4:1-4). 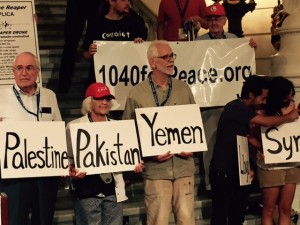 1. We lament the innocent lives snuffed out by drones—the wedding guests, the men assembled to solve local disputes, the families gathered for food and fellowship.

It has been said few innocent civilians are killed, but this is a lie, a lie facilitated by assuming all men of military age are militants, even though there is no evidence they are militants.

2. We lament the massive disruption to family life, work, education and daily activities caused by the constant presence of weaponized drones. Communities are traumatized by anxiety. Children stay in-doors, imagining it is safer there. Neighbors avoid attending to those injured by a drone attack, knowing that a second attack often follows the first. Families avoid the funerals of loved ones, afraid that a drone will attack the mourners.

3. We lament how weaponized drones have radicalized targeted communities, driving more men and women into violent resistance. An enemy of 1,000 may suffer 5,000 deaths from drones, but 10,000 will stand ready to take their places.

4. We lament how the deployment of weaponized drones erodes the rule of law. A nation may not violate the sovereignty of another nation by crossing its borders and killing its citizens, yet this is exactly what weaponized drones routinely do.

Predictably, nearly all governments are rushing to acquire this new killing capacity. Nearly two dozen nations already have it, and within a few more years, most will have it.

5. We lament how weaponized drones are making violence and killing easy, thus subverting more peaceful and enduring forms of foreign policy. The difficult work of building a stable international order brick by brick, of moderating national goals in the pursuit of international peace, is swept aside by the quick-fix of targeted killing.

6. We lament the moral injuries to those conducting drone attacks. They work in an environment where innocent men, women and children are “bug splat,” body tissue rent asunder and strewn across the landscape. We lament that this terror-producing activity is coming to Pennsylvania via a kill command center at Horsham, and that young men and women are being trained as we speak at Fort Indiantown Gap to carry out these atrocities.

7. We lament the callousness of our own consciences, our reluctance to pay attention to the suffering caused by weaponized drones.

Against the witness of history and the skepticism of our own traditions, we have swallowed hook-line-and-sinker the deceptions of governments and the distortions of the media. We have failed to remember that those who want war always manufacture our consent by twisting the facts into a righteous cause.

This is our lamentation. As God is our help, may we find courage and strength to resist these sorrows, this chasing after the wind.
Recent Posts