Add your comments on our Blog postings! 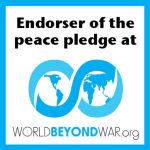 OVERVIEW AND PLAN OF ACTION of www.1040forpeace.org

Mission: Encourage U.S. taxpayers to express their opposition to U.S. military spending and imperialism when they file their federal income tax returns (Forms 1040) each year.
Political Analysis: Even with huge budget deficits, wasteful levels of military spending are strongly supported by virtually all individuals elected to national office, spending driven by fear mongering and political pandering.  In short, our government representatives have been co-opted by militarism and do not honestly assess military spending or the use of deadly force.
Goal: A national movement supporting symbolic tax resistance as a form of democratic expression that nonviolently opposes military spending and the use of U.S. military power to control other peoples and their resources.  By symbolic tax resistance we mean underpaying taxes by $10.40 each year.  Beyond resistance, we seek to redirect revenue to peaceful purposes and restore the vitality of citizen participation in our governance.   The Religious Freedom Peace Tax Fund Bill http://peacetaxfund.org is one current legislative effort to redirect federal revenue, and we suggest donating the withheld $10.40 to this or a similar campaign for change.
Motivation:  Many of us are committed to the teachings of Jesus of Nazareth, who raised the commandments of God high above the laws of government and invited us to a way of living that he called the Reign of God.  We oppose the taking of human life and want all of our actions to build up, not destroy. We love our country, cherish its traditions of citizen activism and community action, and are convinced American contributions to the well-being of our neighbors and the world are jeopardized by the U.S. pursuit of global military domination.
Here are some thoughts on courage…does it take a lot of courage to do this?  https://nwtrcc.org/2018/03/08/on-being-brave-and-war-tax-resistance/
Strategy:  We will mobilize taxpayer activism by inviting the support of trusted leaders who are willing to engage their networks of support.  Primarily, these leaders will be individuals already acquainted with Jesus’ inauguration of the Reign of God and his challenge to the imperial power of his time. We will ask them to raise these concerns within others, publicize 1040 for Peace locally, and promote symbolic tax resistance within their circles of influence.

Organizational Structure:   1040 for Peace is a network of local chapters working to build a more just, peaceful, and sustainable America by reducing government spending on weapons and other military technology. The first chapter was organized in Lancaster County, Pennsylvania in early 2010.  The network has no formal organizational structure.
Plan:  We will provide tools local chapters can use to build support for this national movement:
Recent Posts